The following stories are success stories of our patients that have overcome extreme obstacles and medical conditions. With the approval of the parents, we are able to share the details of these cases and the updates on how they are doing!

I will say I was not one to move vets places very easily. But I am.glad I have. EAD and the entire staff have done an exceptional job with my fur
babies. They mean a lot to me and go out of their way to listen to me, help me, and take the best care of my kids. We have had to out 3 of our dogs down since moving to EAD due to age, and when we did they were so caring and gave us all the time we needed to say goodbye. Thank you all for making my choice to move vets easy and without a doubt a great move.

I had to make the difficult to decision to say to goodbye to my 17 year old cat who had suffered a stroke. The staff was extremely compassionate and informative and helped me to be sure I was making the right choice, and gave me the time I needed throughout the process. The ashes were returned promptly and included a thoughtful card from the staff. No one wants to go through this experience, but EAD made it as painless as they were able to.

When my guy was a puppy he came down with a cough. We took him in and got him antibiotics. A few days later he was coughing up blood so I took him back in immediately. The vet was as concerned as I was and immediately took xrays and blood work. He was prescribed a different antibiotic. They made sure to follow up with us multiple times, they treated him like there own. They have always shown my pets love and compassion and make sure they are fully taken care of.

Lenny is a 3 year old Male Daschund that presented to Eaton Animal Den on emergency, the afternoon of August 24, 2010. His owner, Perry, said he had been missing overnight and found him just before he brought him to the clinic, in a ditch, whimpering and in bad shape. He had been in a pen with mules and we assumed he had been stomped on.

When Lenny came in he was very critical and his prognosis wasn't very good. He couldn't stand, his eye was damaged and he had a fracture of the bones in his head.

Lenny's owner, Perry, knew that if any dog could pull through it would be Lenny and he was willing to give him that chance. He told us stories about what a wonderful dog Lenny was, and how he loved to chase a ball.

Lenny was hospitalized for 6 days. He would go home with the nursing staff at night so he could be continuously monitored. He was on IV fluids and multiple medications but each day he continued to improve small amounts.

Lenny went home with his owner August 30, 2010. Though not out of the woods yet, he was gaining strength, his pain was under control and he was beginning to eat and drink small amount on his own.

Perry started working with Lenny at home and brought him in for a recheck exam September 7, 2010. Everyone at the clinic was anxiously awaiting Lenny's arrival. When he was brought in he was in his kennel but alert and wagged his tail. He could support his weight if leaning on the kennel wall. A huge improvement from the dog we sent home a week earlier. We were very happy with his improvements and so was Perry!

September 23, 2010 the door to the clinic opened and Perry came walking in. We walked over to greet him but were blown away to see Lenny walking in on his own. We were ecstatic! He wagged his tail and gave kisses to everyone!

Everyone at Eaton Animal Den became quite attached to Lenny and developed a great relationship with his owner. Seeing Lenny walk in that day was all the thanks we needed and is why we do what we do here at Eaton Animal Den. Now we're waiting for Perry to bring Lenny in next time to chase his ball! 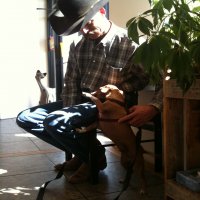